The Airplane as a Symbol of Modernism

How did the airplane — with its marvel and mystery — symbolize modernism in the Twenties? 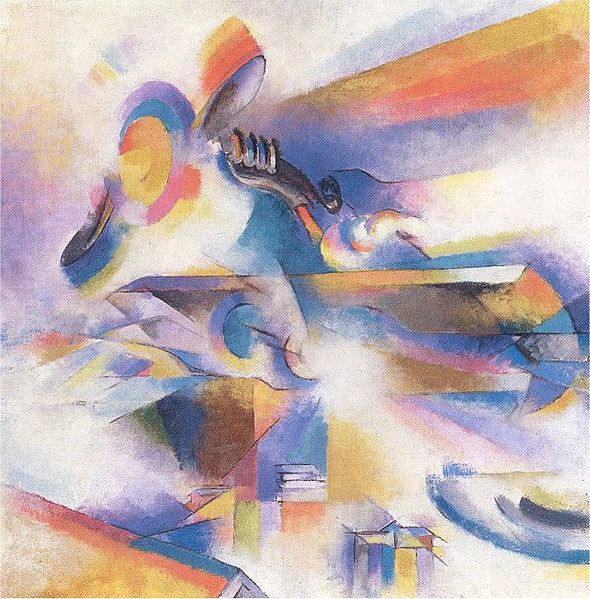 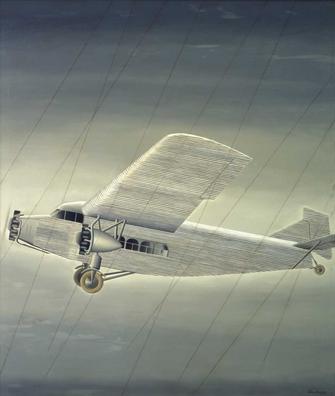 The airplane offered a potent symbol of man’s innovative thrust into the future. In the 1920s, artists depicted the airplane in canvases that, while creating quite different visual impressions, reflected the shared drive to depict the modern.

[Find more primary resources on the Twenties in the collection Becoming Modern: America in the 1920s from the National Humanities Center.]

The Airplane. In 1920, the airplane was only seventeen years old—a modern wonder that most people witnessed from the sidelines in theater newsreels and barnstorming air shows. By the end of the decade, however, the airplane had become a phenomenon that one could experience firsthand. Brave souls could travel by passenger airline service, buy their own “Ford flivver of the skies,” or compete to set a flight record like Charles Lindbergh and Amelia Earhart. The airplane had moved front and center in the American imagination. As such, it offered artists a compelling image for interpreting modernity in the postwar world. As the Brooklyn Museum explained for an exhibition on Machine Age art, “Americans developed an aesthetics of their own, based on the machine. During these years, artists and designers as well as the American public struggled to acknowledge, understand, accept and finally control a machine-driven world.”1

Modernism in American Art. While European modernism was thriving in the early 1900s through avant-garde movements like Cubism and Expressionism, “American modernism” was a term in search of a definition. After World War One, writes art historian Sarah Lowe, American artists “embarked on a search for an authentic modern American idiom. How, precisely, to forge a distinctly American art form, or what it might look like was still unknown.”2 Their search produced an extraordinary range of imagery, marking a distinct break from the prewar Ashcan School and the turn-of-the century American Impressionists. The two paintings highlighted in this lesson reflect different schools of American modernist art — SYNCHROMISM, an abstract form emphasizing dynamic movement and color, and PRECISIONISM, a more realistic style interpreting modern industrial landscapes through “precision” and ultra-clarity.

The object that dominates the two paintings in this lesson is the “aeroplane,” and dominate it does. In Aeroplane Synchromy in Yellow-Orange, you may need to “find” the airplane at first but, as with a visual illusion, once you see it you can’t not see it. In Aeroplane the aircraft is the painting. It captures and holds your attention; your eye can go nowhere else. You fixate on the hovering image, which will be there into infinity, it seems. What makes the paintings modernist interpretations of the Machine Age?

Consider these questions before analyzing the paintings closely.

To continue your initial study, you might follow the four-step process in Discussing Art, developed by Dr. Joy Kasson, University of North Carolina at Chapel Hill. 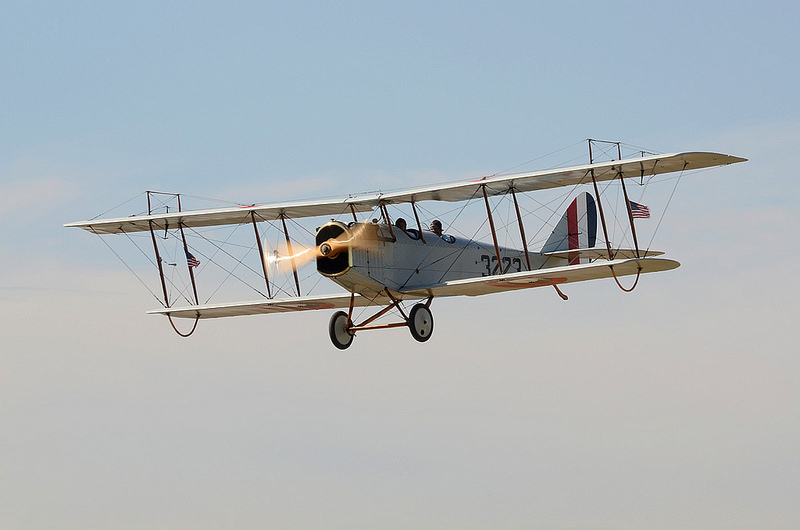 The Painting and the Artist. The canvas is a whir of movement and color. An airplane whizzes above us shortly after takeoff, but we do not perceive it as a coherent object. Instead we’re engulfed by a dynamic array of impressions that almost startles us—the bold spinning propeller, the solid uplifting wings that break through the canvas edge, the blinding flashes of reflected sunlight, the brief glimpses of rooftops. Within the abstract blur are two more realistically portrayed objects—the open engine that shoots orange flames out the exhaust, and the helmeted pilot who seems to catch our glance. Through the immediacy of close-range flight, we are offered a fleeting yet galvanizing image of the modern. All that is solid is moving too fast to assemble in one’s sight. All is in constant flux. The modern is an ephemeral, ever-changing, and exciting reality. Above all, it is now.

Stanton Macdonald-Wright was raised in Virginia and California and pursued his art studies in Paris. In 1912 he developed with artist Morgan Russell the color-saturated abstract style they titled SYNCHROMISM. Blending color and music theory with Cubist influences, they created vivid rhythmic “chords of color” in their paintings which they called synchromies (“with color”). As Macdonald-Wright explained, synchromy “is to color what symphony is to sound,”2 i.e., a synchromist selects colors from the color wheel as a composer selects a chord structure, the “key” of a piece. As a tonic chord consists of the first, third, and fifth intervals of the tonic musical scale, for example, the “scale of red” would be composed of those intervals on the color wheel—red, yellow, and blue-green.3 With this technique, Macdonald-Wright created dazzlingly alive canvases that burst beyond their edges to envelop the viewer. View these synchromist paintings by Macdonald-Wright from 1917: Street Synchromy, and Synchromy #3. What are the core visual elements in these works? What effect is Macdonald-Wright working to achieve in the viewer?

“Stanton was a dreamer,” writes art historian Will South. “He unashamedly, unabashedly looked for transcendence in painting. He wanted to create images that would take you physically, emotionally, spiritually outside of yourself—create some other state of mind, bigger than what you would normally experience in your day-to-day life.”4 In few of his works did he explore an object as he does in Aeroplane Synchromy. Aviation held a unique interest for him, as South explains: “Aviation, a metaphor for Macdonald-Wright for an expanded consciousness, also suggests a change—from ignorance to awareness.”5 In what way does Aeroplane Synchromy portray this change? [Consult an extended overview of Macdonald-Wright’s work from Art & Antiques.]

The Airplane. The Curtiss “Jenny” (JN-4) was a single-engine open-cockpit biplane familiar to all onlookers in its day. Developed as a pilot training airplane during World War One by the Curtiss Aeroplane Company, it maintained a vigorous postwar life in civil aviation (Lindbergh made his first solo flight in a Jenny). Familiarizing yourself with the Jenny will aid your interpretation of the painting; see 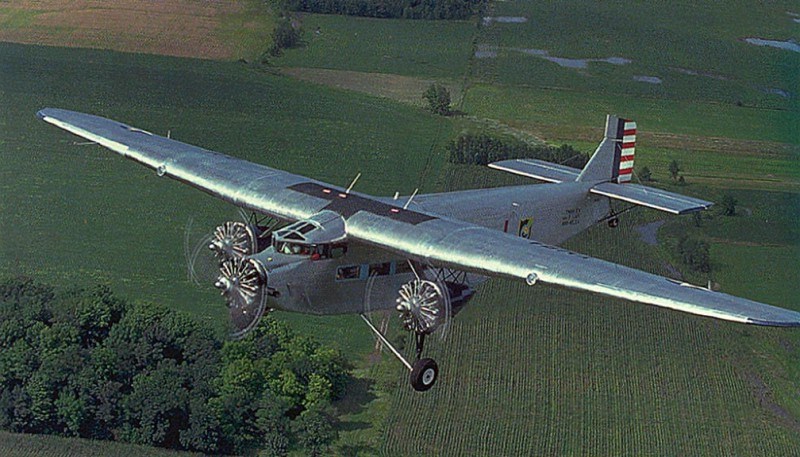 The Painting and the Artist. The shiny metal airplane appears suspended in air, as though frozen in flight. Only the blur of the propeller and the wirelike lines that crisscross the canvas inject a sense of movement. While technically “realistic,” the painting goes beyond mere illustration to evoke the allure and mystery of flight. With no pilot or passengers visible, with the sky and ground defined only by darkening greys at top and bottom, with the plane closely bounded on the sides and surrounded with a natural halo of light, the airplane is an artifact of modern man’s transcendence of his earthbound limits—but not an icon to be worshipped. “Oblique and puzzling,” wrote art curator Constance Kimmerle, “Aeroplane exudes a sense of haunting loneliness while suggesting the eeriness of a dreamlike experience.”6 Here the modern is a concrete reality that we recognize and admire, yet the future it heads toward is undefined and beyond the canvas. Above all, it is entrancing.

Raised in the industrial Pittsburgh area, Elsie Driggs was a member of the PRECISIONIST art movement that came to define American modernism. Claiming the machine age as their realm, the Precisionists created streamlined (“precise”) depictions of urban and industrial settings with boldly defined geometric shapes, commanding lines, unambiguous light and dark contrast, little detail, no texture, and rarely a human being. Driggs painted Aeroplane shortly after she experienced her first plane flight in a Ford Tri-Motor, the “Tin Goose.” “I took a plane for the first time in my life,” she later related. “ . . . I loved the flying. That was a new sensation . . . the captain sent back a message, ‘Would I like to sit with him for awhile? . . . and I can tell you, you do get a wonderful feeling of flying right out on the nose of one of those planes.”7 How does Aeroplane convey the wonder of flying in a precisionist mode? Compare Aeroplane with Driggs’s 1927 precisionist paintings Pittsburgh and Queensborough Bridge (scroll down).

The Airplane. Nicknamed the “Tin Goose,” the Ford Tri-Motor (three engine) with its corrugated aluminum body was one of the first all-metal airplanes. Produced by the Ford Motor Company from 1925 to 1933, it carried a crew of three and up to nine or ten passengers. Familiarizing yourself with the “Tin Goose” will aid your interpretation of the painting; see 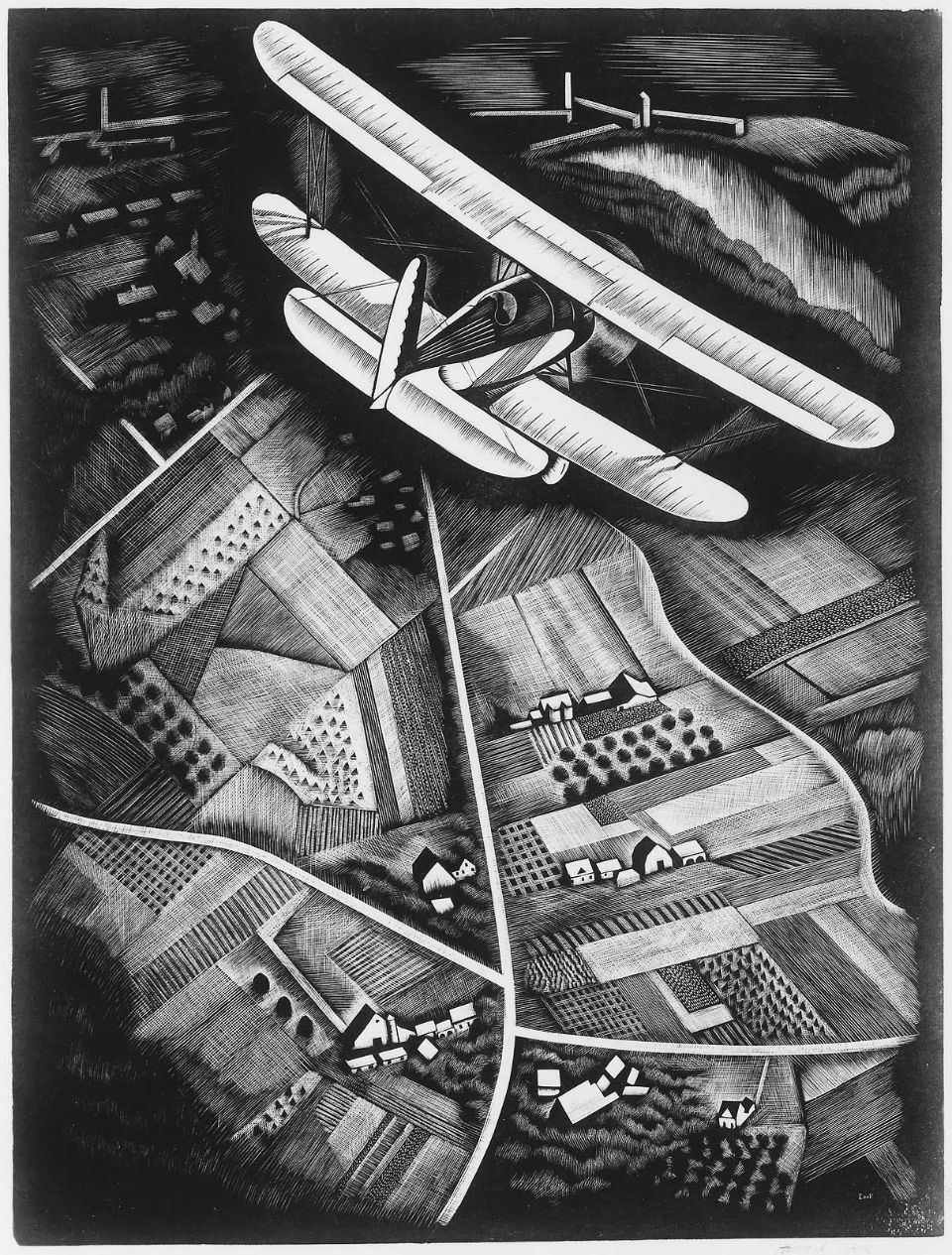 By 1931 the exuberance of the 1920s had ended in the Great Depression. Have students compare the two Aeroplane paintings with this woodcut from 1931 and write an essay or create a Power Point presentation in response to this question: How does Cook interpret the airplane and the modern in the new circumstances of the 1930s?

In Airplane, Cook depicts a biplane flying over the countryside sculpted with roads and well-tended farms. But we are not sharing a sunny afternoon flight with an amateur pilot. We are hovering above an unmarked airplane with a featureless pilot, flying over stylized farmland with no human presence. We run ahead of the shadows toward the sunset . . . and what is that ahead? A gaping abyss? Does its edge suggest sneering lips? How do the roads become a foreboding fence, delineating the darkness? Or wait, is our imagination getting ahead of us?

A Massachusetts native, Howard Cook studied printmaking in New York City and throughout the 1920s created woodblock prints for national magazines including the Forum, Harper’s, and Atlantic Monthly. His work became increasingly abstract in the 1930s and 1940s, a transition that may be evident in Airplane. Study the zoomable image; be sure to zoom in close to study the airplane, pilot, farm landscape, country roads, the “fence,” and the upper right corner that is starkly separated from the storybook farmland by the illuminated airplane. How might you retitle the work to convey its tone? As you proceed, you might consult overviews of Cook’s work from The Old Print Shop.